I recently received a Tweet from https://twitter.com/WARSTUFF  @WARSTUFF about an incident out on Salisbury Plain 70 years ago.

…is dug up by Iraq and Afghanistan veterans

Rosemary Baillon never knew her father. A war hero who flew Spitfires in the Battle of Britain, he was tragically killed aged 26 in a dogfight over the English Channel in November 1940 – four months before she was born. Under attack: Pilot Officer Paul Baillon was forced to bail out of his Spitfire Mark 1 after a tense clash with the Luftwaffe in the skies above Salisbury Plain, Wiltshire, during World War II

It wasn’t Pilot Officer Paul Baillon’s first brush with the Luftwaffe. A month earlier he had been at the controls of one of the iconic fighters when it was shot from the skies of south-west England by a German bomber’s machineguns.

On that occasion, the RAF ace bailed out safely but his stricken aircraft crashed on Salisbury Plain.

In an upbeat letter to his wife and Miss Baillon’s mother, Peggy, he recalled the episode as ‘all very exciting… especially coming down by parachute which really was not at all unpleasant!’

His words from beyond the grave were among the little Miss Baillon knew of the incident… until yesterday.

For the 72-year-old, a research fellow in geopolitics, was present when wreckage from the Spitfire Mark 1 from which her father ejected unharmed was dug up by soldiers wounded in Iraq and Afghanistan.

The physically and mentally-injured troops and veterans excavated the remnants of the plane, buried for 73 years, as part of Operation Nightingale, an award-winning Ministry of Defence project which uses archaeology to aid their recovery.

During a highly emotional day, Miss Baillon was handed buried artefacts from the stricken, mangled plane, number P9503, including part of a propeller, a crumpled fuel gauge, a piece of windscreen and buckles from the parachute release mechanism.

The trinkets were small but meant the world to the pilot’s daughter. She said: ‘Seeing the Spitfire being excavated meant a great deal to me. It is remarkable to touch something that my father would have touched so many years ago. 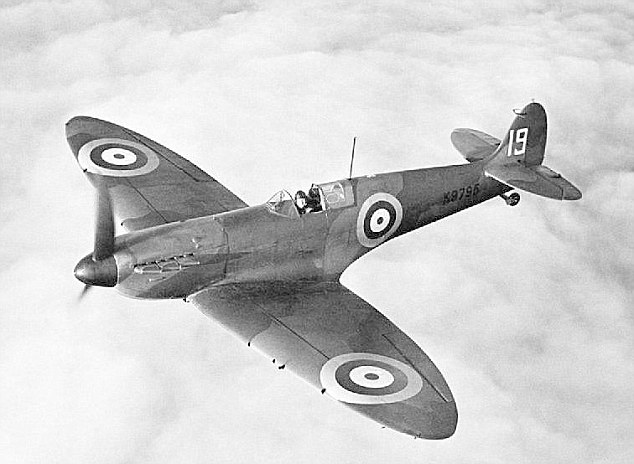 Brave: Pilot Baillon’s Spitfire Mark 1 (stock image pictured) crashed on the Salisbury Plain on October 27, 1940. The officer incredibly survived after bailing out of the aircraft but was killed a month later in a clash with the Luftwaffe over the channel 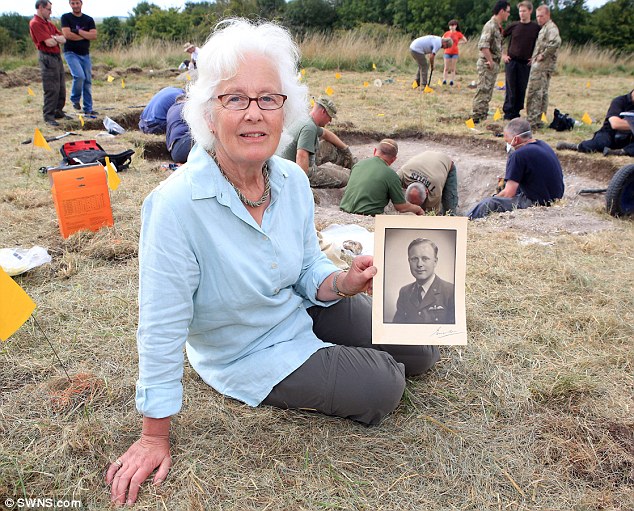 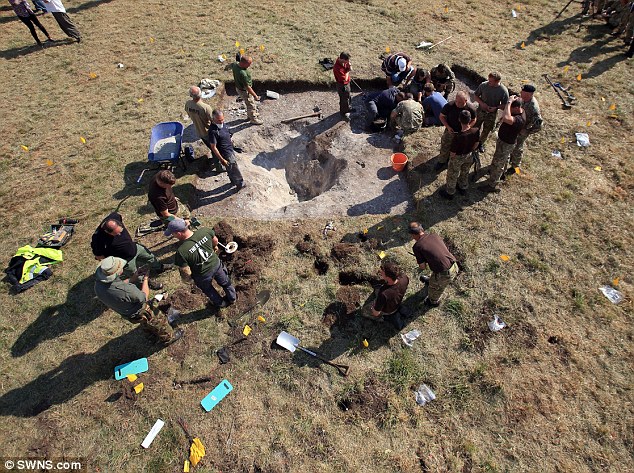 Award-winning programme: The remains of the Spitfire Mark 1, number P9503, are being excavated by soldiers wounded in Iraq and Afghanistan as part of the Ministry of Defence project Operation Nightingale

‘It makes me feel closer to my father. Coming here and seeing the landscape has made what happened to him more realistic.

‘Like anyone who lost their father in the war, you are always emotional all your life, you always have a sense of mourning for never knowing them. Nothing will ever take that away but being here has been a great comfort.’

Pilot Officer Baillon, from Northamptonshire, was a solicitor before the Second World War but at the first prospect of conflict he joined the RAF volunteer reserve and learned to fly.

He was posted to fly Spitfires with 609 Squadron – the first unit to record 100 ‘kills’ – and was stationed at Middle Wallop.

On October 27, 1940, he and two comrades took off in pursuit of a German bomber – a Junkers 88 or Heinkel 111, according to combat logs – which was heading to bombard the docks and armaments factories in the west of England. 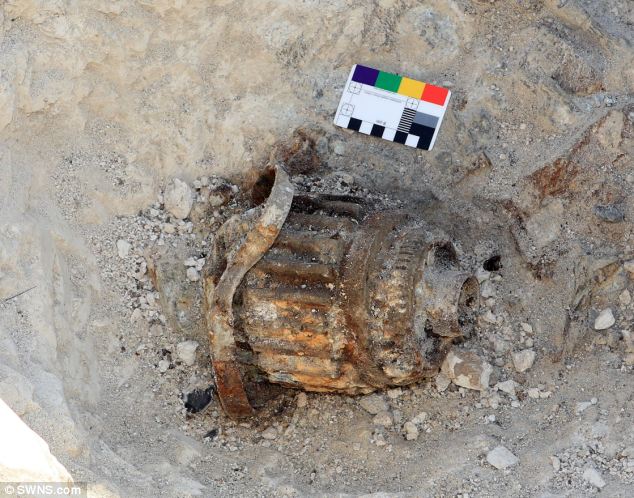 The remains of Pilot Baillon’s Spitfire plane that has been uncovered. Soldiers have already pulled part of the landing gear and some bullets from the ground 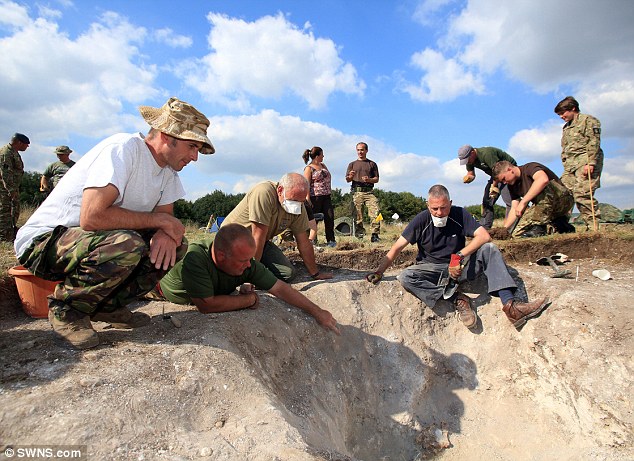 Good cause: The Ministry of Defence archaeology project is to help aid wounded soldiers’ rehabilitation 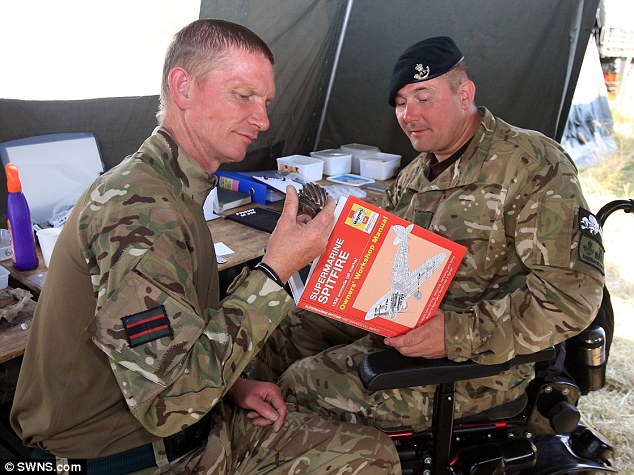 Guess work: Wounded soldiers read a manual on the Spitfire to try and identify parts of the plane they uncovered during the dig 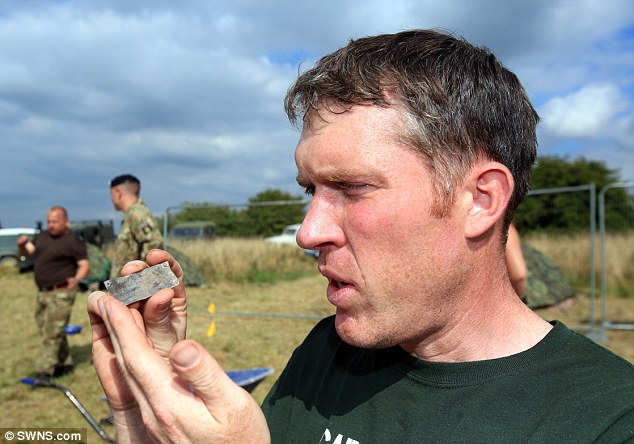 Crash site: The Spitfire Mark 1 crashed on the Salisbury Plain more than 70 years ago on October 27, 1940, after coming under attack by a German plane

As they attacked, a round from the German plane punctured his oil tank, spewing fuel all over the windscreen and ‘reducing visibility to nil’. Unsure he could land the Spitfire safely, Pilot Officer Baillon bailed out and the aircraft crashed close to Upavon, Wiltshire.

In his letter home from his base, the astonishingly matter-of-fact RAF officer said: ‘I came down quite unharmed close to an aerodrome where I washed off all the oil which simply covered my face and head, had some lunch, chatted with some fellows I knew there and was flown back here this afternoon.’

A month later, during a dogfight with the Luftwaffe over the Channel, the pilot was shot down and killed. He is buried at Bayeux in France.

More than 70 years later, Richard Osgood, a senior historic advisor at the Defence Infrastructure Organisation, which runs the MoD’s land and properties, received a request from amateur archaeologists to excavate the site. 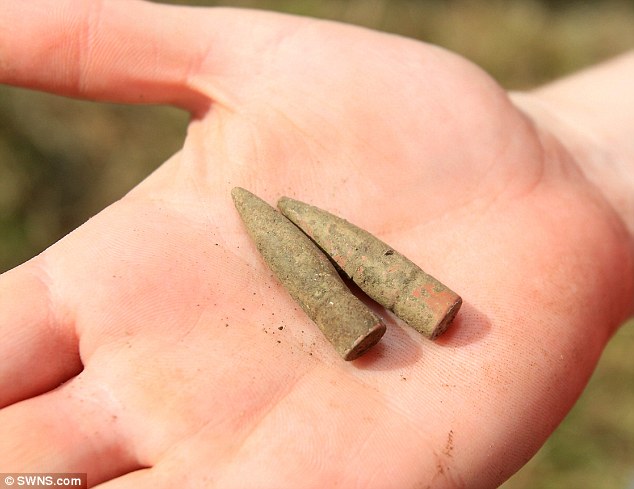 Lethal: Bullets were among the Spitfire plane parts to be found during the dig yesterday 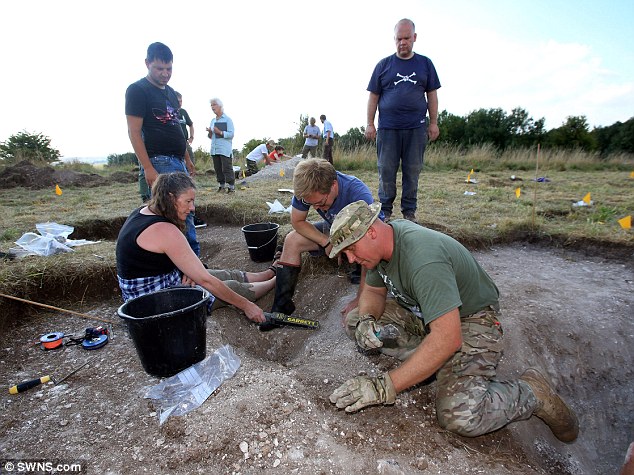 Discoveries: The soldiers uncovered part of a propeller, a crumpled fuel gauge, a piece of windscreen and buckles from the parachute release mechanism as well as several bullets 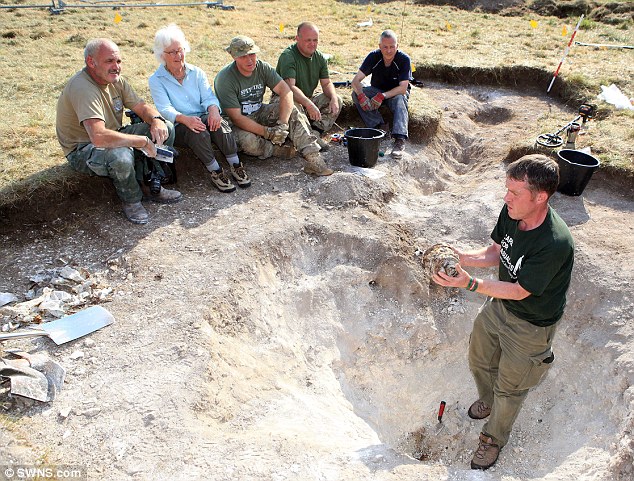 Mr Osgood, who founded Operation Nightingale for injured Riflemen, refused because the wreckage was buried on MoD land. But he thought it would be an excellent site for the wounded troops to investigate.

He assembled a team of around 25 current and ex-members of The Rifles to take part in the dig, which began this week. In a remarkable twist, they managed to trace Pilot Officer Baillon’s daughter, who lives near Stowmarket, Suffolk, to inform her of the project.

Mr Osgood said: ‘The project has made a poignant and moving discovery. Archaeology is all about people – whether they be prehistoric, Roman, Saxon or those who flew in the Second World War.

‘This site has yielded traces relating to the sacrifices of airmen from the 1940s and it has been a real privilege to re-tell the story of Paul Baillon.

‘We knew from the combat logs kept at the time what happened during this flight but we don’t know the final few moments before the plane crashed.

‘This excavation is the final piece in that story.’ 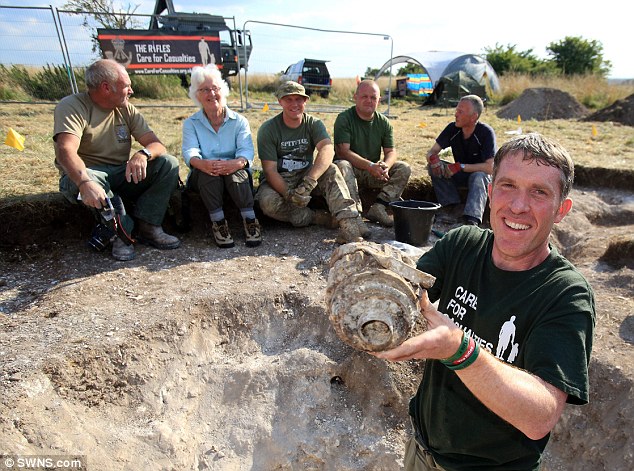 Special moment: Rosemary Baillon said getting to see parts of the plane piloted by her father, who died before she was born, has been a great comfort 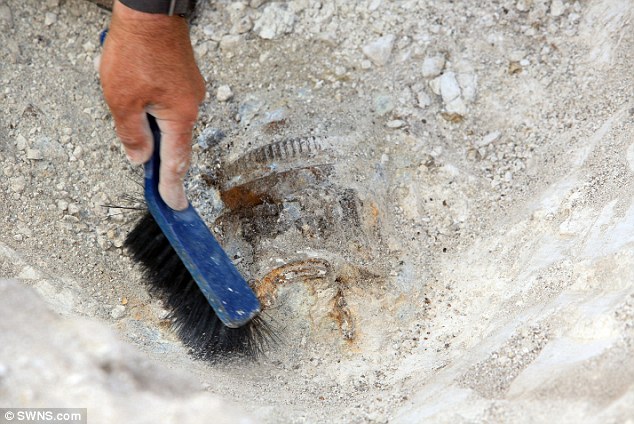 Rare opportunity: Around 25 former members of The Rifles took part in the dig on Ministry of Defence land 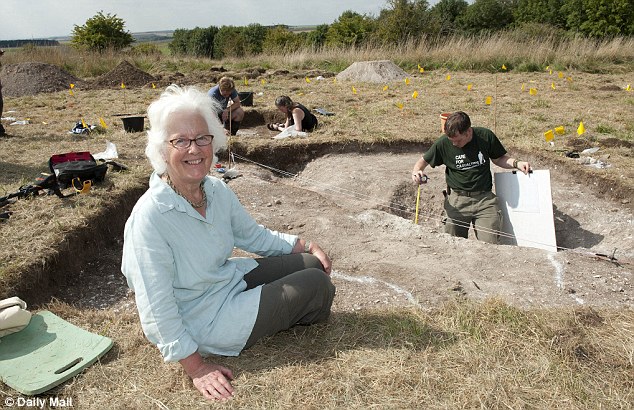 Going all out: Those running Operation Nightingale managed to track down Rosemary Baillon to inform her of the project and invite her to visit the excavation site 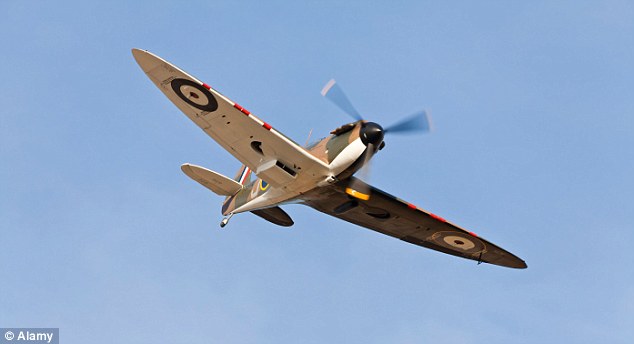 In action: A Spitfire Mark 1 similar to that flown by Pilot Officer Paul Baillion pictured in the sky

The team will now analyse the remnants dug up to try and find out more about exactly how the Spitfire crashed.

Lance Corporal Dave Hart, 37, who suffered serious arm injuries in a suicide attack in Afghanistan in 2004, signed up to Operation Nightingale after leaving the 6th Battalion The Rifles on medical grounds. The primary school teacher from Tiverton, Devon, has now completed eight digs.

He said: ‘It was fascinating to excavate Iron Age and Bronze Age sites but to dig a Spitfire is magical. Everyone knows about their importance in the war. To be able to do it for Rosemary is extra special.’

Operation Nightingale was inspired by the novel ‘A Month In The Country’, which portrays an injured First World War veteran who convalesces by restoring a Medieval church mural.

The programme helps with troops’ recovery by boosting their confidence and self-esteem, ensuring they do not fall victim to depression and family breakdown, and giving them new skills for when they return to duty or start a new life outside the military.

Under the guidance of experienced archaeologists, wounded soldiers from The Rifles have been taking painstaking care to excavate historic sites. 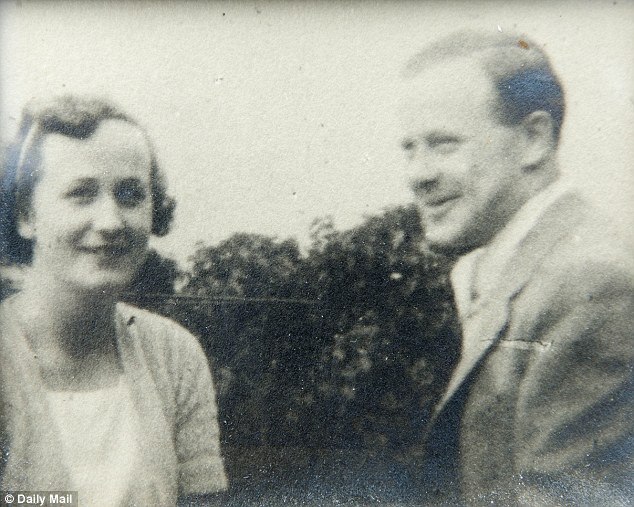 Happy couple: Pilot Officer Paul Baillon and his wife Peggy in 1939, just one year before he died 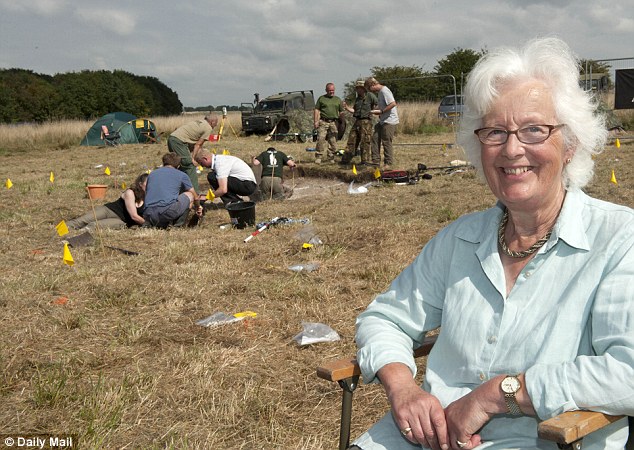 Family ties: Rosemary Baillon never got to meet her father but said getting to see his plane being excavated has given her a new link to him 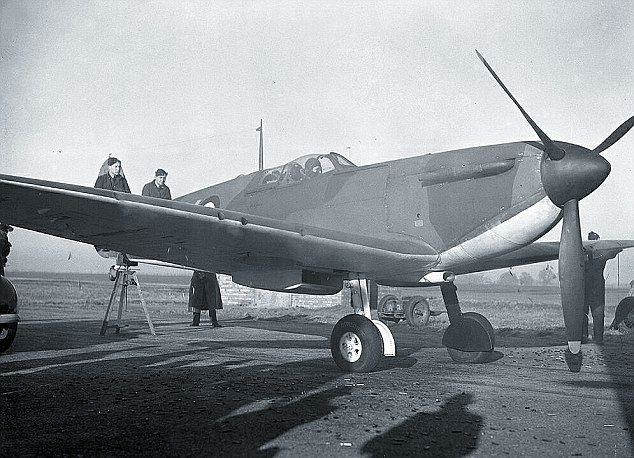 Lucky escape: Pilot Officer Paul Baillon didn’t die in the Salisbury plane crash after he managed to bail out in his parachute in time. Tragically he was killed a month later

They have learned to photograph and map landscapes using state-of-the-art surveying equipment, careful uncover, clean and bag artefacts, and catalogue their invaluable finds.

Last year the injured troops uncovered 26 Saxon burials, an earlier prehistoric cremation, three shields, five spears and drinking vessel and other artefacts dating back to the 6th Century during a dig at Barrow Clump on Salisbury Plain.

Because the sites lie within the restricted Army training area on Salisbury Plain they have been protected from destruction by farms, settlements and roads as well as the attention of other archaeologists.

Operation Nightingale has won a British Archaeological Award to recognise its work and has appeared on the Channel 4 programme Time Team. 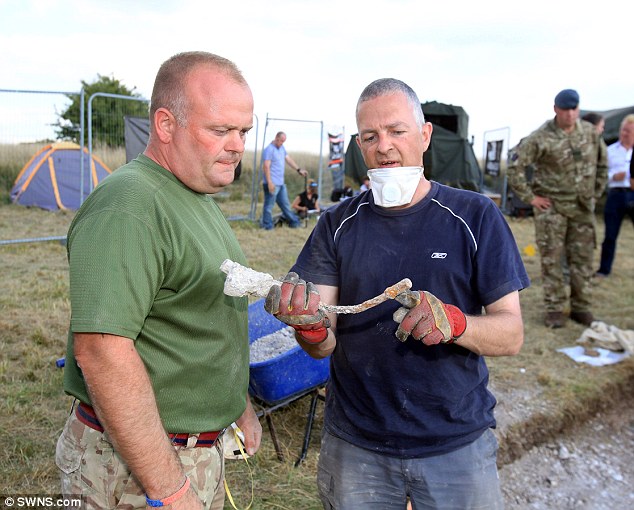 Hard at work: The team of wounded soldiers will analyse the remnants of the Spitfire under the guidance of experienced archaeologists 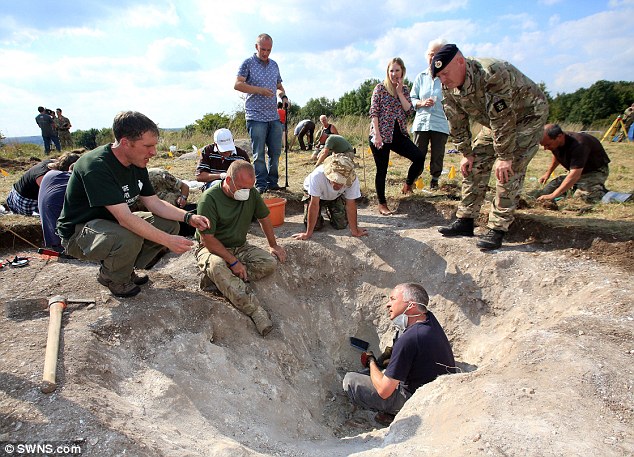 Inspiration: Operation Nightingale was inspired by the novel ‘A Month In The Country’, which portrays an injured First World War veteran who convalesces by restoring a Medieval church mural 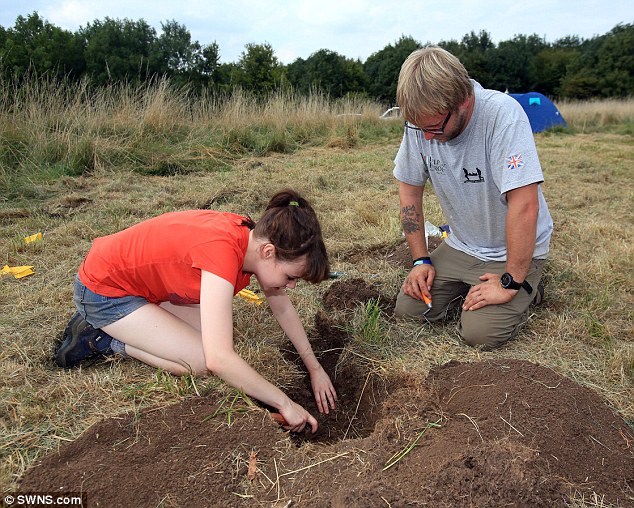 Education: The project helps the soldiers learn new skills for when they return to duty or for new careers outside the military 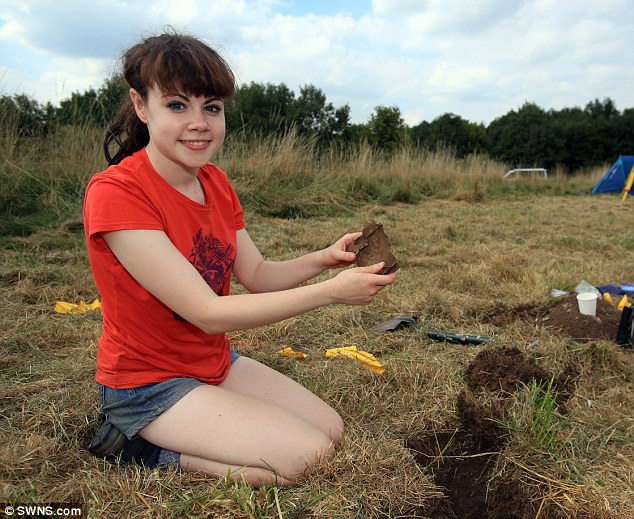 Top finds: Troops uncovered 26 Saxon burials, an earlier prehistoric cremation, three shields, five spears and drinking vessel and other artefacts dating back to the 6th Century during a dig at Barrow Clump on Salisbury Plain last year as part of the project

SPITFIRES: FAITHFUL PLANES THAT FOUGHT THE BATTLE OF BRITAIN 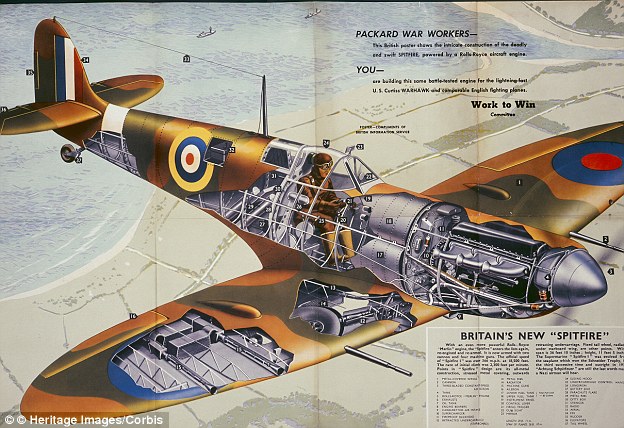 A place in history: A poster unveiling the Spitfire from around 1939

FACTS AT A GLANCE: